If we find effective ways to treat these children, we will have solved one of the most challenging and lethal cancers. Those findings could apply to other difficult cancers and could have a large impact on the field.” 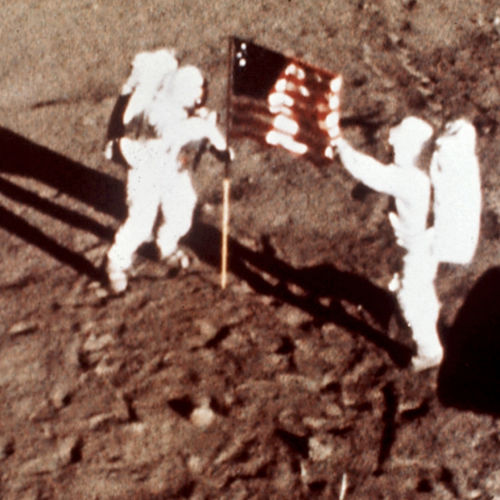 The National Cancer Moonshot, an initiative headed by Vice President Joe Biden, sounds like it aims to cure cancer once and for all. Look at the details, though, and you’ll realize it lacks that noble goal and the singular focus of Present John F. Kennedy’s original moonshot — putting a man on the moon by 1969. Here’s how the vice president could reshape his initiative to match the focus of the original moonshot and make a real difference: aim to cure a single currently untreatable type of cancer. A key figure in American history links both the real moonshot and the one I am proposing: Neil Armstrong, the astronaut who first set foot on lunar soil.

The cancer I’m referring to is diffuse intrinsic pontine glioma (DIPG). This pediatric brain cancer affects the pons, the portion of the brain stem that controls breathing, blood pressure, balance, sleep, and other basic functions. The D in DIPG represents its most insidious feature. This cancer doesn’t appear as a discrete tumor, but instead spreads like sand throughout the brain stem, making it impossible to remove by surgery. Once the diagnosis of DIPG has been made, most of its victims live for less than a year.

Before Neil Armstrong battled gravity and walked on the moon, he and his family fought cancer. In 1961, Armstrong’s 2-year-old daughter, Karen, was diagnosed with DIPG. Writer Ben Evans recounts the fight to save her life in an article for AmericaSpace.com: “X-ray treatments to reduce the size of the tumor hit the little girl particularly hard, rendering her unable to walk …” By the end of that year, her symptoms had returned and the only option was radiation therapy with cobalt. “This was relatively new at the time and although it could destroy the cancerous cells, it also irreparably harmed healthy ones, too …” Karen died about seven months after her diagnosis, on the Armstrongs’ sixth wedding anniversary.
Nearly 55 years later, the prospects for children diagnosed with DIPG remain grim. Although the cure rate for children’s cancers as a group has improved over the past 50 years from 10 percent to nearly 90 percent, the five-year survival rate for children with DIPG is almost zero. Because the condition is rare, striking fewer than 400 US children a year, DIPG receives scant attention and even less research funding. The federal government devotes only 4 percent of its cancer funding to all pediatric cancers. Little of that money is directed to this cancer. But some progress could come out of a meeting this week between medical experts and FDA officials to talk about DIPG treatment options.

Focusing the cancer moonshot on this one cancer could actually help achieve the vice president’s ultimate goal of curing all types of cancer. The medical advisors of one DIPG-focused foundation, The Cure Starts Now, argue that curing DIPG, because of its resistance to all current treatments, represents the “home run cure” that could lead to a cure for all cancers.

Is that a crazy idea? Two top DIPG experts don’t think so.

Here’s what Dr. Mark W. Kieran, who directs the Pediatric Brain Tumor Center at Dana-Farber/Boston Children’s Cancer and Blood Disorders Center, had to say: “If you could cure the most malignant of all cancers in children, that would be a significant step forward. Cancer is a complex disease, and there isn’t going to be one cure. But the insights from finding an effective therapy for DIPG will have broad potential implications.”

Dr. Javad Nazarian, a specialist in brain cancers at Children’s National Health System in Washington DC, echoed those thoughts: “Effective treatment of children with DIPG is a challenge — we have failed despite 45 years of clinical research. If we find effective ways to treat these children, we will have solved one of the most challenging and lethal cancers. Those findings could apply to other difficult cancers and could have a large impact on the field.”

On the 50th anniversary of President Kennedy’s moonshot speech to Congress, Vice President Biden reminded his listeners that Kennedy said we needed “a degree of dedication, organization, and discipline which have not always characterized our research and development efforts.” Focusing the billion-dollar cancer moonshot on curing one cancer that so far cannot be successfully treated with surgery, radiation, or chemotherapy would demonstrate the same “dedication, organization and discipline” that took mankind to such literal and figurative heights in 1969. The payoff would be similarly enormous — expanding the horizon of medical progress in much the same way that Neil Armstrong’s lunar journey vastly expanded the boundaries of human exploration.

Anil Adyanthaya is an attorney from Newton Upper Falls, Mass.